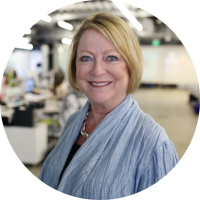 Lorie Hearn is CEO and Editor of inewsource, a​n investigative nonprofit based in San Diego, CA. She is a life-long news-aholic and truth seeker. Her passion is investigative, accountability journalism, the type that holds powerful people to answer to the public. Lorie founded ​inewsource in 2009, after decades of reporting and editing in newspapers on both coasts. ​inewsource​ has won scores of awards locally and nationally and was nominated for a national Emmy. Lorie retired from The San Diego Union-Tribune, where she had been a reporter, Metro Editor and finally the senior editor for Metro and Watchdog Journalism. Reporters and editors on her staff were part of the Pulitzer Prize-winning stories that exposed Congressman Randy “Duke” Cunningham and led to his imprisonment for taking bribes from government contractors. A graduate of the University of Delaware, Lorie was a Nieman Foundation fellow at Harvard University in 1994-95.